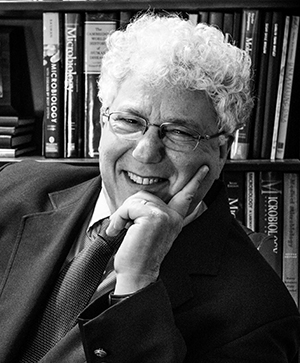 Prof. Jeffrey M. Becker is Chancellor’s Professor Emeritus and former Head of the Department of Microbiology (2003-2016). He received a BA in biology from Emory University, completed a PhD in microbiology from University of Cincinnati, and was a postdoctoral fellow at the Weizmann Institute before coming to UT in 1972. Dr. Becker's research involved the molecular biology of membrane transport, the structure and function of peptide pheromones/hormones and their receptors, and the discovery of fungal virulence factors. He has published over 260 peer-reviewed articles and was awarded research grants from many agencies including the National Institutes of Health (NIH), the American Cancer Society, and the National Science Foundation. One of his NIH grants was renewed continually for 35 years. He was honored with a NIH Research Career Development Award, was named a UT Chancellor's Research Scholar, received UT’s Alexander Prize and was Marshall of the College of Arts & Sciences. Dr. Becker was elected as a Fellow of the American Academy of Microbiology and the American Association for the Advancement of Science. He served on many NIH grant review panels and editorial boards of scientific journals and served as a consultant to many pharmaceutical companies including Eli Lilly and Merck. He was one of the four founders of a new biotechnology company located in Cambridge, Massachusetts, whose goal was to find and develop new drugs for infectious diseases. That company, Mycopharmaceuticals, Inc., merged subsequently with Millenium Pharmaceuticals, Inc.  His most cherished accomplishment is the training of over thirty-five doctoral and master’s students and the mentoring of over two hundred undergraduate students on research projects in his lab.

Becker retired from active research in 2018 and no longer accepts undergraduate or graduate students for work in his lab.

The flagship campus of the University of Tennessee System and partner in the Tennessee Transfer Pathway .